Text: Romans 12:1-2
Twelfth Sunday After Pentecost, Proper 16A
Listen to the Sermon here!

If you were to examine the oldest records on earth, you’ll find that sacrifice often formed a part of many ancient religions. In fact, it’s a nearly universal idea that in order to be pardoned, or to be blessed and receive the aid of your deity, you needed to offer something to obtain it. The ancient Israelites also had a whole range of sacrifices they offered to the Lord. Daily, weekly, monthly, yearly, and on various ever-recurring occasions, the altars of the temple ran with blood from the dead bodies of slain beasts and birds. The temple was a veritable slaughter-house. But Christianity said, “No more of this!” When Christians think about sacrifice, we think about what Jesus has done for us on the cross. But, is that the end of the story? Is the sacrifice of Christ upon the Cross the only sacrifice which Christians should talk about? In our epistle reading from Romans, the Apostle Paul talks about a kind of sacrifice which all Christians must still offer. 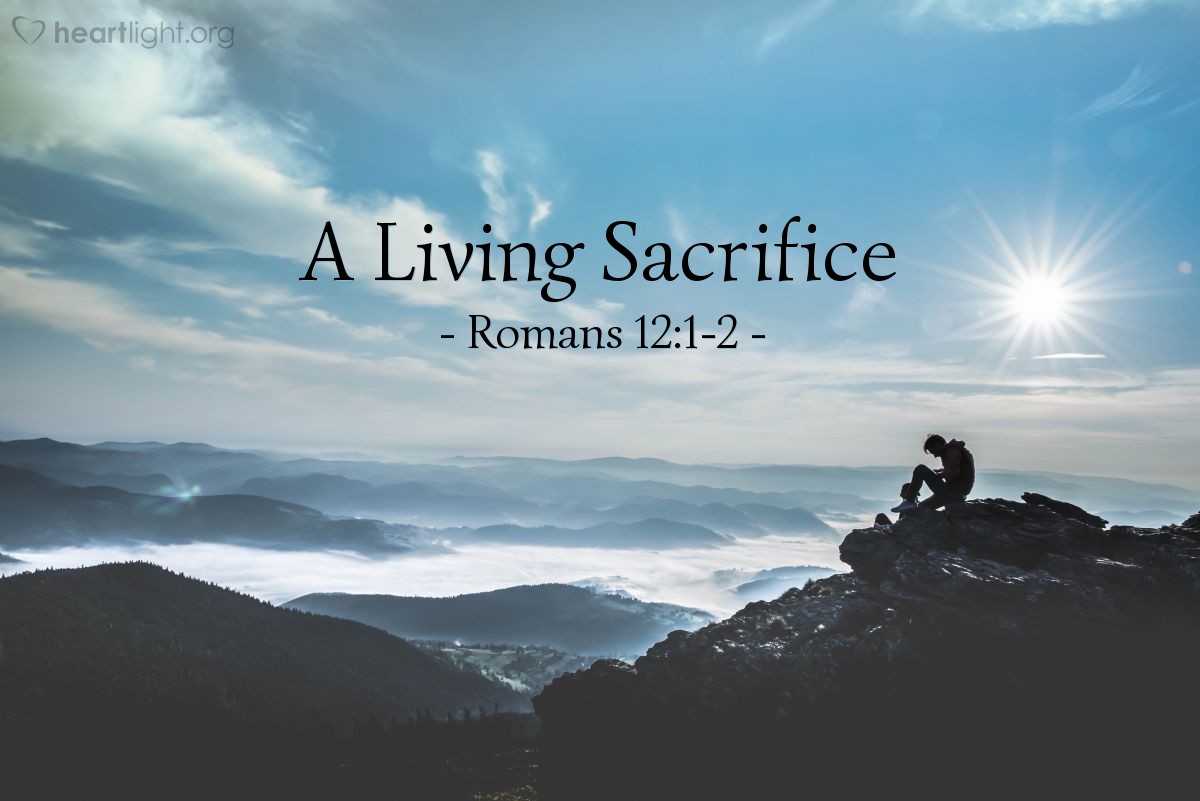 We Sacrifice Our Own Bodies

Paul urges, “present your bodies as a living sacrifice” (Rom. 12:1). We are embodied people, not disembodied spirits. We relate to others and the world around us by our bodies. Take away our bodies and we can’t hear, see, speak, walk, touch or act. To offer our bodies is to offer ourselves, everything that we are, all that we think or feel. We are not supposed to degrade our bodies, but to offer them, weak as they are and full of sin, knowing that they will one day be redeemed in the Resurrection.

When Paul talks about sacrifice, he’s is not really talking about making sacrifices in our lives. Our own personal sacrifice should be far more than a waving of wheat, or an unblemished goat. Our sacrifice should be more than few dollars set aside for mission work in foreign lands. Our sacrifice should include all those things, but it’s so much more. Paul uses a vivid, shocking, idea: your whole self must be laid on the altar like a sacrifice in the Temple. The big difference is that, normally the sacrifice is there to be killed, but the Christian’s self-offering is actually all about putting to death the old way of life and walking in the new life God has given. We are to give ourselves in self-sacrificial service to God every day, every hour, every minute. And the Holy Spirit enables us to do that; to put to death the deeds of the body and to begin to do what’s right in God’s eyes.

We Have Our Minds Renewed

Paul then spells out what being a living sacrifice entails. The mind and the body are closely interconnected; they work together as a team. The mind is the parliament of the body, where feelings are felt and assessed, options are considered, and decisions are made. Sacrificed Bodies come from transformed minds. Paul tells us to “be transformed by the renewal of your mind” (Rom. 12:2). Having one’s mind renewed and offering God one’s body are all part of the same complete act. This renewing of the mind does not automatically happen to us. Our thinking is not instantaneously changed. The ruts of the old life are not always easy to get out of. Some of our ways of thinking are deeply ingrained, and they will not disappear overnight. On top of that, our society also seeks to shape us according to its pattern, and to get us to think after the way of the world.

Many Christians in today’s world never come to terms with this. They hope they will be able to sort of live up to God’s standards while still thinking the way the rest of the world thinks. It can’t be done. Paul says, “Do not be conformed to this world” (Rom. 12:2). He is saying, “Do not let society squeeze you into its mould. Don’t allow it to dictate to you how you should think or what you should think. Don’t let it govern how you can and can’t behave. Don’t automatically agree with everything that society around you holds up as good.” Being comforted after the world is essentially making what’s fashionable in our society the standard of our life. Paul is telling us not to conform to the worldly and prevailing ideas, but to God’s will and ideas. This is extremely difficult because we like to fit in with our surroundings and friends, just like we really don’t want to arrive at a party dressed very differently from everyone else. We are like chameleons who cannot decide what colour to be! We adopt one colour in church and with Christian friends, another at work, and so on. What is forming us? What is shaping your life? What are we feeding into our minds? If you spend all your free time watching television, browsing social media, reading secular books, and listening to secular music, then you can expect your mind to be fundamentally secular. This is why so many Christians are confused. This is why many churches are emptying. But, we must be ready to challenge our society when shouts, or even whispers seductively, that it would be easier and better to do things its way.

A transformed mind means the world’s thinking is turned upside down by God. Only God can renew our minds and begin any transformation in us. Our job is to cooperate with God’s Spirit as He dismantles our wrong ways of thinking and creates new, correct ways of thinking. A renewed mind submits to Jesus the King even though our world shouts at us that it has no king but caesar. If we have our mind renewed, we recognise that God’s way is the best and we really to want to go that way. We then lead and discipline our bodies and lives to conformity with that way.

We Are Motivated By God’s Mercy

The basis of all this is the mercies of God, as Paul so memorably writes: “I appeal to you therefore, brothers, by the mercies of God . . .” (Rom. 12:1). God’s has shown mercy to the corrupt and fallen human race by sending his Son. We were thoroughly lost. But God provided a thorough forgiveness through the death of his Son. Christ offered himself as a bloody, atoning sacrifice on your behalf. This one sacrifice was offered once and for all time. Someone else was handed over and condemned in our place. Another died so we may live. God’s compassion for you can be seen in the body of Jesus hanging on the cross. Jesus is the living sacrifice: the one who died to make atonement for you, but who three days later was raised from the dead. In Jesus, we have obtained mercy with God. God has pity on you and brings you from your life of sin and misery to a life as a forgiven child of God.

Gratitude for the God’s mercy on us is what motivates us to serve him. Our text is one of the most well known in the Bible because it contains a summary of our response to God’s compassion in the gospel. Our response, our entire Christian life, is rooted in God’s mercy. Paul does not appeal to us on the basis of his authority as an apostle, nor does he beat us with the law, but urges us on the basis of God’s mercies. Worship, obedience, and self-sacrifice are the only reasonable response to God’s incredible mercy. The only sacrifice that we can offer which will be acceptable to God is the sacrifice of ourselves. That self-offering is acceptable to God because his mercy has come all the way to the Cross where it met us in our rebellion, sin and death.

The Christian life is not a dreary obligation or begrudgingly following a set of rules. Our lives as Christians are a joyful response to God’s compassion in saving us, a way of saying thank you for all that God has so mercifully given us in Christ. It is a way of life based not on law but on God’s mercy. How we live, then, is a measure both of how much God’s mercy means to us and of how grateful we are. God has shown mercy to inexcusable and undeserving sinners, in giving his Son to die for them, in forgiving them freely by faith, in sending them the life-giving Spirit, and in making them his children. You have no greater incentive to to offer yourself as a living sacrifice, than God’s mercy offered to you freely in Jesus Christ.