‘This town ain’t big enough for the both of us!’ We’ve all heard that phrase. It originally came from western movies, and now has become a stock phrase used to emphasise that two rival characters cannot coexist. But, this stock phrase can be descriptive of very real situations where rivalry and conflict arise. Sometimes it’s in an office where two managers are both wanting their plans to go ahead. Sometimes it’s in a sports team where two players both want to be the star. Sometimes, it’s in a home where two squabbling teenagers both want to run things their way.

It’s even uglier when this kind of rivalry gets played out in a church; and that’s what Paul is anxious about here in our epistle reading. He is dealing with an ugly rivalry between Jewish and Gentile Christians. Israel as a whole has rejected the Messiah; but an increasingly large number of Gentiles believed in Jesus and joined the small minority of Jews who did accept the Gospel. Because of this, some Gentile Christians seem to have thought that they had ‘replaced’ Jews in God’s plan, that the church was now a ‘Gentiles-only’ club. This is where the jealousy, rivalry and old prejudice come in. The Church is not big enough for both Jew and Gentile, they think. So Paul is answering these questions: Can any more Jews be saved, or has God rejected them? What really constitutes the people of God?

A Warning of Spiritual Danger

Paul offers a solemn warning. The fate of Israel is a neon sign whose letters shine the bright declaration of God’s patient kindness to those who have faith, and his ultimate severity to the those who do not. Think about the history of Israel: they were constantly rejecting God and serving Baal instead. Ultimately they were exiled out of the promised land because they failed to heed to prophets warnings. The temple, and Jerusalem were given over to the flames, not once, but twice. So, the Apostle says, “Don’t be proud, you believers, but fear.” God does not change. What he did in the past, he can do again in the future. If God will do that to His own people, His own nation, don’t think He won’t do the same to you if you forsake the faith He has given you.

God is like a master gardener. He takes the pruning shears and cuts off the dead and fruitless branches of the olive tree. He breaks off the spiritually dead branches of Israel. When Gentiles become Christians the opposite is happening. Gentiles are like wild branches, grafted into the original cultivated olive tree. You and I are part of that. We’re wild branches. This means that we are not part of God’s people because of our family or because we’re a specific race or ethnicity. We are part of God’s people by faith. The people of God are a single family, the children of Abraham, identified by faith in Jesus the Messiah. Paul’s point is simple: anyone can be part of God’s family by faith in Jesus. Likewise, anyone can be really ‘cut out of the tree’ if they don’t have faith. Those who have been cut off can come back, and the way for them to come back is to have faith in Jesus the Messiah. They can be grafted back ‘if they do not continue in their unbelief’ (v. 23).

There is a real warning about falling away. If God did not spare the physical descendants of Abraham when they fell into unbelief, he will certainly not spare you, a Gentile Christian, if you, also fall into unbelief. And if those who were born Jews became unbelievers and were cast out, it’s not impossible for Christians of Gentile origin to fall in the same way. Do not ever take the grace and mercy of God lightly. If someone pulls you from a burning building, you don’t run back into the building again because hey, that was a lot of fun being carried out by a fireman. If God rescues you from Sin, Death, and devil, and grants you the gift of faith, do you return to Sin, Death, and devil and destroy your faith? Of course not. But it happens. When we see the unbelief of others, or when we see others fall away, let it warn us all the more to look well to our own faith.

Paul’s warning also has specificity to it. The Jews looked down on all Gentiles and wrongly thought they were secure just because of their ethnicity. Some Christians have much the same kind of attitude. We must not suppose for a moment that God’s grace is tied to a particular ethnic group. If you make that mistake—relying on ethnicity to identify who is in God’s people, instead of faith alone—you can expect God to react the same way he did with unbelieving Israel.

The Jews also made the mistake of assuming that God’s choice of Israel perpetually guaranteed spiritual benefits to each every member of the nation. If anyone was born as a Jew, was circumcised, kept the law the best they could and offered the sacrifices, then they thought their salvation was ensured. Many Christians likewise presume a kind of corporate salvation—that members of my church are “in” automatically. There are many who profess to be Christians and assume that they will go to heaven because they are external members of the Church. I was baptised, confirmed, and went to Church regularly, had communion. I’m saved right? But going to church, partaking of the Word and Sacraments is not enough (as crazy as that is for a Lutheran pastor to say!) No, you need to actually respond to God’s Word and Sacraments with repentance and faith. Not just once, but daily. They’re not magic. It’s not enough to claim to be a Christian, you actually have to be one.

All of us are in the same boat. A gracious God was met with disobedience, and to our shock, he uses that disobedience to have mercy upon us. This is how God has decided to act, to rescue a world overflowing with disobedience. You were disobedient apart from faith, but you have received mercy. The Jewish people remain disobedient apart from faith, and yet God still calls them home to receive mercy. No deals, just grace and mercy and undeserved kindness and a forgiveness that they do not deserve. Nor do we.

“For God has consigned all to disobedience, so that He may have mercy on all.” Note the “all” – all are disobedient: the good, the bad, the Jew, the Gentile, the religious, the unreligious, black and white, all are condemned. It was necessary for all people, Jew as well as Gentile, to be shut up in the prison called ‘disobedience’. Locked in this prison, all hope and all self-help had disappeared. Disobedience, and more disobedience was all we had and all we could bring forth. Only one door allows one to leave this prison and it is inscribed: “God’s Mercy.” God has placed all Jews and all Gentiles on the same level in order to save all of them by the same means, namely his mercy. 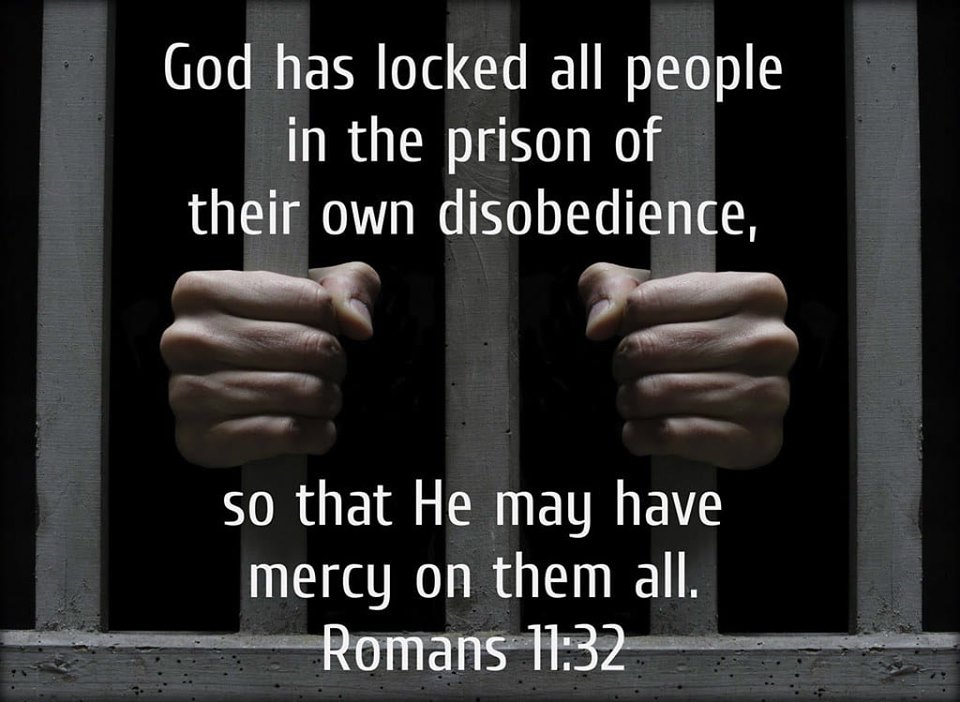 This is the mercy which was gained for you by disobedience. Gentile disobedience led to God choosing the Israelites. In our disobedience, humanity put the Messiah to death on a cross. God used that to save us. Jesus was brought low so that the entire world might be lifted up. Jesus was cast away so you might be accepted, and Jesus was brought back to life so that all might live through him. God used the unbelief and rejection of the Jews to make room for the Gentiles in His Israel, His church, and to show the world that true salvation is by grace through faith apart from works. This gratuitous mercy saves all alike by justification through faith alone. The mercy that he gained is available for everyone, as a free gift of grace rather than a privilege or birthright.

All have sinned and are disobedient. But God has mercy upon all. The Jew, the Gentile, the Israelite, the Canaanite, black and white, even you. We become part of God’s family by faith. We remain in God’s family by faith alone. The gifts and the promises of God are irrevocable. God does not go back on His word. If you turn to Him, you will find a Saviour in Jesus who has always been turned to you. You don’t deserve God’s mercy. Nor do I. Nor does anyone. It is by grace you have been saved, a gift of God, not of works, so that no one may boast. It is by grace that you are here this morning, by grace that you hear the Word of faith preached to you, by grace that you receive the sign of God’s mercy in Christ in the Body and Blood.