Text: Romans 9:1-18
Ninth Sunday After Pentecost (Proper 13A)
Listen to the sermon here!

Have you ever known someone who used to be a Christian? Did you wonder what went wrong? How is it possible that a person – born and raised in the Church, baptised, confirmed, part of Sunday School, could just walk away? Have you known people like that? I’m sure you not only know people like that, but you also feel some sense of sorrow and anguish over them. They had all these blessings: they knew their Bible, they learned the Catechism, they had a Christian family, they were members who served in the Church. Where did it all go wrong? Why don’t they believe?

This is the kind of question which the Apostle Paul is asking in our Epistle reading. Last week we read that nothing “will be able to separate us from the love of God in Christ Jesus” (Rom. 8:39). No sooner has Paul said this, then he immediately thinks of his fellow Israelites. Paul is talking about God’s chosen people, his treasured possession. And Paul is agonising over it. He has deep sorrow and even wishes that he could be cut off from Christ, if by doing so he could save his fellow Israelites. That’s how deeply Paul feels this sorrow. The question on the table is this: What went wrong? Why did Israel, through whom the Messiah came, reject the Messiah? Why didn’t Israel believe? Why, given their special status as God’s priestly people with all the covenants, promises, worship, legislation, prophets, why did Israel not believe and get behind Jesus, the true son of Israel? It’s a tough question. And an important one, for us here today because we face a similar question. 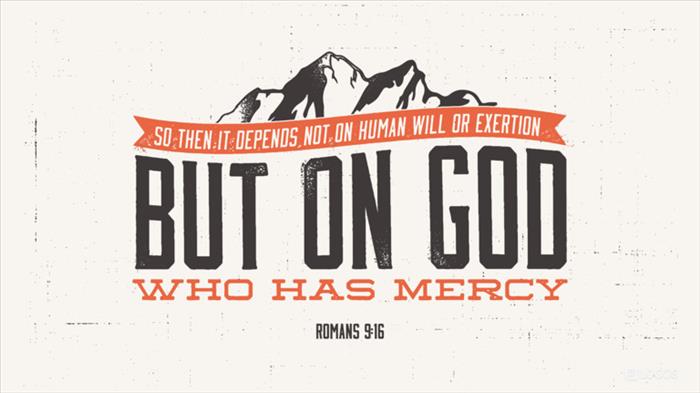 The Choice is Made by God

Abraham had two sons, Isaac and Ishmael. Ishmael was the son Abraham had with his wife’s servant (with her permission), because Abraham did not believe God’s promise that he would be the father of nations. Ishmael was denied the inheritance because he was not conceived out of faith but of Abraham’s works. That’s the point. Isaac, Abraham’s son with his wife Sarah, is the son of the promise. The one conceived by the Word of God, the one conceived in faith not in works. And so, just because you are descended from Abraham doesn’t automatically put you into God’s Israel. It’s by faith, not by works. Trust in the promise, not taking matters into your own hands or being born into the right family. Isaac shows us that the people of God are defined by trust in God’s promise.

Again, consider Rebecca’s twins, Jacob and Esau. Esau was the firstborn. Jacob came out second, grabbing the heel of his brother. But even before the twins were born, while Rebecca was wondering about all the kicking going on in her womb, God told her that the older would serve the younger. God chose Jacob. There was no human reason to choose between them, they were twins. Yet, He made that choice before either of them were even born. He made the choice before the boys could prove themselves or do anything, right or wrong. God chose the second born to carry the promised Seed of salvation over the firstborn. Jacob shows us that the people of God are defined by God’s own choice, not ours

Paul is making a point here: We don’t chose God, he chooses us. The choice is his and his alone. That choice is not based on a person’s family, morality, or privileges, it’s not by works. The choice is put into effect by the Spirit calling through the Gospel. God does not wait to see who will believe, or choose us because he knows we will believe. God does not choose us because we believe, but in order that we may believe, that we may trust in his promise. You’re not a Christian because of your family, because you chose to believe, or because you had the blessing and privilege of being raised as a Christian. You’re a Christian because God chose you, and gave you faith through the call of the Gospel.

God’s Choice is Based on Mercy

And the response of many, maybe even your response, is exactly this: “That’s not fair!” Paul knows you’re thinking this. “Is there injustice on God’s part?” Paul asks (Rom. 8:14). “By no means! God forbid!” God is not acting based on what we deserve. We don’t want him to do that. When someone is on death row, a pardon is not what they deserve. If the Prime Minister pardons one person on death row but not another, the other person can’t claim unfairness. Paul says that God’s choice does not depend on your works or your faith, but on one solitary thing: it depends on God’s mercy. And that is the key. Isaac shows us that the people of God are defined by trust in God’s promise. Jacob shows us that the people of God are defined by God’s own choice. Paul now adds that the basis for this choice and promise is entirely because of God’s undeserved mercy.

That is why God had the national of Israel, to show his mercy. Because of his mercy, God makes a people for himself out of Abraham, Isaac, and Jacob. However, only a small remnant of Israelites trust in God’s promise and not in themselves. And in the end, faithful Israel can be reduced to one man on a cross. One perfect Jew who kept Torah when no one else could; God’s only-begotten Son. God’s mercy, shown to Israel, is focused like a laser beam on Jesus. He goes through the water and the wilderness. He is God’s beloved Son and Servant. He is the presence of God on earth, the true temple. His sacrifice replaces all those animal sacrifices. He goes to His exile and returns, in His death and resurrection. Out of this one faithful Jew comes salvation for the world.

So what’s God doing? In a word: mercy. Mercy shown towards you because of His Son Jesus. That’s what God wants. That all be saved and come to the knowledge of the Truth (1 Tim. 2:4). He’s willing to take those who were His mortal enemies, and invite them to be part of His people. Is God crazy? No! He’s merciful and gracious for Jesus’ sake. And that mercy and grace are not based on how well you kept the rules – whether the rules of the firstborn, our rules of “fairness” or any other rules. And that’s the point of it all – salvation is by grace, a free gift, undeserved, unmerited, granted for the sake of Jesus’ death and resurrection.

That promise is not just for some. God has offered mercy to all. Trust in God and his promises and you’re forgiven freely. Try to do it yourself and you’re going to fail every time. God is not unjust because the same mercy is offered freely and available to absolutely everyone! The reason why Israel, the reason why some who were raised in this parish do not have faith is not because of God. No, it’s their own fault. They have rejected Christ and stubbornly refused to trust in God (Rom. 9:30-10:4). They turned away from God. They were not willing to allow the Holy Spirit to work through the Word. God extends his hand of mercy to all, and many slap it away.

Did the Word of God fail because many of the Israelites didn’t believe? Did it fail because some who may have been raised in this very parish didn’t believe? Paul’s answer: No. In fact, it succeeded beyond expectations. From one man Abraham came a nation, Israel. From the nation of Israel came one Man – Jesus Christ. From one Man named Jesus the Christ came salvation for the world. That promise of forgiveness, life, and salvation goes out throughout the world by the preaching of the Gospel. God offers everyone, including you today, eternal life and forgiveness for Christ’s sake. You have faith, and that is proof that God’s word has not failed. What about those who don’t believe? The problem is not on God’s side. He has not withheld from them any of his mercy. If you reject Christ and the Gospel, you have no one to blame but yourself. But, if you trust God, if you are saved, then thank God, because it’s God’s work, and God’s alone based entirely upon his mercy for you in Jesus.