Text: Matthew 2:1-12
Gospel for The Epiphany

We live in quite the technological age, don’t we? Google has successfully mapped out the entire world. Governments and corporations have put countless satellites into orbit. And, on top of those two feats, we carry in our pockets smart phones, which at a moment’s notice can pull up a wealth of information or send a picture of a cat half-way across the globe! Now, combine these three things, and you have GPS! That’s right! You can enter the destination you’d like on your Smart Phone, and it will give you directions all the way there. It’ll even tell you what time you’ll arrive. It’s mostly accurate too! But, it may come as a surprise to you, but even Google can err. I personally have been led the entire wrong direction by Google!

Well, tonight we’re not following Google, but a star. Our Gospel lesson talks about Magi from the East, likely Persia, perhaps Babylon. We call them, “wise men” but Magi actually means “magicians”. They were pagan astrologer-priests from Persia. They tried to figure out present and future events by the movement of the stars, which they held to be gods.

This group of Persian magicians, magi, knew something about a king promised to the Jews. One night, they saw a star in the sky; it was different from what they usually saw. Something about this star led them to the conclusion that the king of the Jews had been born. This information about a foretold king perhaps came from Daniel. He was put in charge of all the magi in Babylon. So, they set out on the long journey. They followed the star, because didn’t have Google to help guide them.

The star took them to Judea. At this point, they lost sight of the star and let their human reason take over. They thought the obvious thing to do was to go to Jerusalem, and inquire with the royal family. If there was a birth of a new-born heir, surely the King Herod would know about it! No doubt they were expecting to find the Jews already rejoicing about this momentous event. Well, it turns out that there weren’t any baby boys bouncing around the Herod household that year. Herod’s Royal family doesn’t know of any new births. And you can imagine that this bunch of Babylonian star gazers looking for a newborn “King of Jews” would pique Herod’s interest. He calls in the teachers of the Torah and asks them where the Messiah was supposed to be born. And they flip the prophetic pages to the book of Micah the prophet. They followed the Star, and it brought them to the Holy Scriptures. “But you, O Bethlehem Ephrathah, who are little to be among the clans of Judah, from you shall come forth for me one who is to be ruler in Israel, whose origin is from of old, from ancient days.” (Mic. 5:2)

The magi own wisdom didn’t lead them to a new king, but to a paranoid despot. They came with their own preconceived expectations, and were surprised to see that things where not what they expected. Human thinking can only get you so far. We think that science and technology will be able to solve all our problems. We are confident in our own ability to find the answers to whatever problem presents itself. “I can fix it!” Not every problem can be solved by human ingenuity. Sometimes, human wisdom leads you down a path of destruction and pain.

Pain and destruction are exactly what came next. Herod had murdered his wife, three sons, mother-in-law, brother-in-law, and uncle, all in fear that they were plotting against him. Caesar Augustus once quipped that it was safer to be one of Herod’s pigs than to be one of his sons. The pigs were safer because they weren’t going to be eaten by Jews. Any fool who had even the slightest inkling of Herod’s raging paranoia would know that coming to him with news of a new king, was like tossing a match into a gas can. But that’s where human reason and efforts get you on your own, death and destruction. It leads to Herod’s slaughter of the children in Bethlehem.

But perhaps the lesson we can take from this is that God does not want us to search for him through signs and wonders nor trust in our own wisdom or ingenuity. On our own we cannot find the Saviour or the answers for some of life’s most difficult questions, no matter how wise we think we may be. If we try to follow our own ideas, we’re bound to end up throughly lost. God wants us to follow his Word. That is where God has revealed himself to us. The magi followed the star to the prophetic Scripture, which pointed them to Bethlehem. But they had to look it up. The Lord wants us to “search the Scriptures” (Jn 5:39) because they are all about Jesus. That’s where he comes to you. Instead of following your own opinions about God, religion, morality, and life, let God’s Word gives you true direction, direction to the King of Kings, and with him, eternal life!

To God in the Flesh 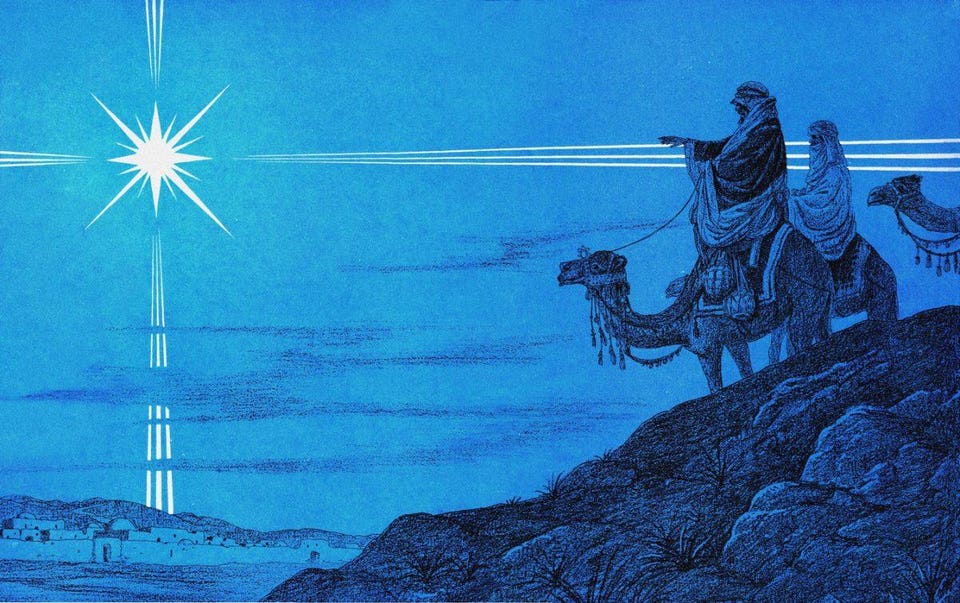 So off to Bethlehem the magi go, and the star reappears, and like some divinely ordained GPS, it guides them to the little house at the end of the block where they knock on the door and find a young mother with her little child. They didn’t see a mere child, but their King and their God. Standing was out of the question. They fall down on their knees and touch their foreheads to the ground, the deepest sign of respect there is in the middle east, and they worship the little Child with their gifts of gold, incense, and myrrh. They treated him with the kind of respect and honour you’d give to divine beings. They had come many, many miles to do what is rightly done only for God himself. They “worshiped him.” They offered him their praise, adoration, and worship. They followed the star, and it led them to worship God in the Flesh.

The gifts that the Magi brought were appropriate presents to bring to kings and gods. The gifts of the magi remind us of who this Child of Bethlehem is and what He will do. I doubt that the Magi fully understood the meaning of their gifts. They were probably bringing the most expensive, portable gifts they could – gold, incense, myrhh. Each suggests something important about Jesus.

“Born a King on Bethlehem’s plain, gold I bring to crown him again, King forever, ceasing never, over us all to reign.” Gold is the gift royalty. This is King David’s Son, the Ruler of the universe, the King of all kings and Lord of all lords. But the gold was not as precious as the faith that presented it. Their faith in the Divine King was “more precious than gold.”

“Frankincense to offer have I; incense owns a Deity nigh; prayer and praising, voices raising, worshiping God on high.” Incense is the gift for a god. This is little Child is God of God, Light of Light, true God of true God. But, the incense was not as valuable as their prayer which was carried to God’s throne like incense, by their newborn mediator.

And then there’s the Myrrh, the gift of suffering and death. “Myrrh is mine; its bitter perfume breathes a life of gathering gloom; sorrowing, sighing, bleeding, dying, sealed in the stone-cold tomb.” Myrrh was used to embalm bodies. They follow the star which leads them to God in the Flesh, born to die. Roman soldiers were the first Gentiles after the Magi to call Jesus ‘king of the Jews’ (27:29), but the crown they give him was made of thorns, and his throne was a cross. At that moment, instead of a bright star, there was an unearthly darkness (27:45). During that darkness, a single Gentile voice said: yes, he really was God’s son. Then, the divine King whom the Magi worshipped died a cruel death. Myrrh would be used only a few decades after the visit of the magi to embalm Jesus’ corpse. All of this is for you, to lead you to the bright, perpetual light of eternal life with God! The true gift was given to Magi. The true gift is God in the Flesh for you. “Glorious now behold him arise; King and God and sacrifice. Alleluia, Alleluia, sounds through the earth and skies.”

The word “epiphany” means appearing or manifestation. It usually referred to the appearing of a god in human form. The Epiphany season is a time where we look at all the ways God in the Flesh has been manifested to us.  You’ve come to Bethlehem tonight, where God’s Son Jesus has appeared as King and God and Sacrifice. He is here to receive you, to forgive you, to wash and feed you, to send you out as lights into this dark world. This evening you are a lot like those astrologers from the east. You have been guided to the Christ Child by Word and sign, Word and sacrament. God has shined the light of His Word into the darkness of your own sinful hearts, which were once alienated from God and lost. Christ, the morning Star, has shined upon you by His Spirit. You have been guided to the house where God’s Child, His King, is here hidden for you under the signs of water, word, bread and wine. Tonight you are ushered into the presence of the King, and it is a presence just as real and tangible as that little Child at the Virgin’s feet.

The peace of God, which passes all understanding, keep your hearts and your minds in Jesus Christ. Amen.