Text: Hebrews 5:1-10
Epistle Lesson for the Fifth Sunday of Lent, Series B

In the name of Jesus. Amen.

As Protestants living in North America we get a little fidgety when we hear talk of “priests” don’t we? When talking to people about coming to church or about going to private confession, one sometimes encounters a certain amount of resistance. The ideas and concepts associated with priesthood are not a popular subject. The common attitude of many is, “I don’t need a priest, I can go directly to God and ask forgiveness. I have a personal relationship with God. I often go to him in prayer, asking him to forgive my sins. Why would I need a priest to get in the way when I can do it myself? My faith is between me and God alone.” This kind of attitude can be a dangerous one though. Sometimes we feel perfectly capable of managing our relations with God in our own way, at our own pace, and according to our own desires. It’s that North American, independent, do-it-yourself kind of attitude.

Now, the New Testament in certain places talks about how all baptized Christians are in a sense priests, and it also talks about the need for and function of pastors in local churches. However, here in Hebrews, we see that we stand in need of a certain type of priest; a high priest. Hebrews sets up a contrast between the high priests of Aaron in the Old Testament, and Christ, who is our high priest. Since Jesus is our great High Priest, we must place our confidence in him alone.

I. He Is Our Mediator Before God.

It is important to recognize the real distance between God and ourselves. We think twice about sauntering into the presence of the Prime Minister or the Queen. What makes us think that we can just waltz up to God on our own? Many times, we have problems asking for help. We like to do it on our own. We’d rather not get help then admit that we need it! If we’re looking for a promotion at work or going for a job interview, we don’t hesitate to find someone, (an intermediary), who will pave the way and put in a good word for us. So too, we really do stand at a distance from God. That distance is created by sin, which is our refusal to give God his due. We have the inward propensity to misunderstand and twist Christianity and turn it into something we do. But, we must see our need for a mediator, for one who will stand in the gap and be an advocate for us. 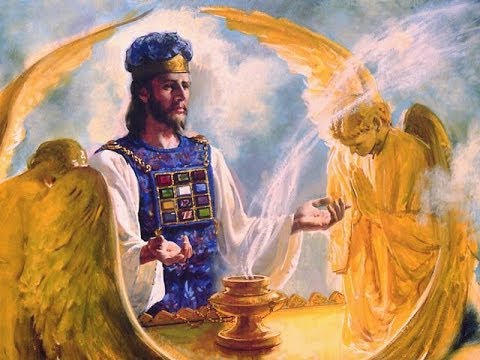 Under the Old Covenant, the priest served as a bridge between the people and God. As a human himself, he represents other humans before God, especially in his task of offering animal sacrifices for sins. These were not designed to twist God’s arm, as though something humans could do would put God in their debt, but the sacrifices were to make atonement for their sins. The Old Testament priests since Aaron were continually being replaced because of their mortality. Their offerings for the sins of the people were done repeatedly, day after day, year after year. God authorized and empowered the high priest to represent the people before God.

God has appointed a high priest, his Son, to bridge the gap and to cover the distance between us and God. Jesus is our mediator before God. Because Jesus is true man, he is fully human, and therefore able to represent us. It is humanity which has refused to give God his due, and so humanity is responsible to repay what we owe. This chasm between God and man was so great that only God was able to bridge it. So, our mediator must be at the same time fully and completely God and fully and completely human. There has never been anyone more uniquely qualified to represent humanity before God then the God-Man, Jesus Christ.

II. He Is Sympathetic of our Weaknesses.

The Priests in the Old Testament also had what we would call a pastoral role, looking after people, sympathizing with them, getting alongside them and making the idea of the ‘bridge’ a reality in their experience. But there was a drawback to the humanity of the Old Testament priests. Ordinary priests were themselves sinners, so they had to offer sacrifices for their own sins as well as those of the people. Because he himself had sinned, he was in no position to be condescending or look down upon those who had gone astray. He could easily understand why they could give in to some temptation and fall into sin. He had the same weaknesses and fell into sin just as they did.

Like the Old Testament high priests, Jesus is able to deal gently with the ignorant and the wayward. When Jesus represents us before the Father, he isn’t looking down on us from a great height and being patronizing about us poor creatures down here who can’t really do much for ourselves. Jesus, the great High Priest, is able to sympathize with our weaknesses because in every respect he has been tempted as we are yet remained without sin. As the sinless Son of God, he was far superior to those Old Testament priests because He had no need to make sacrifices for his sins first.

Do you suffer in this life? All who have reason for tears and loud cries—those mourning the death of a loved one, those who are poor, those who are overwhelmed with life, those who are terrified, those who are sick, those who are lonely—their tears, cries, and clenched silences are met and answered in Christ our great high priest. We have a high priest who understands us and what we suffer. He gets it! He knows how difficult it is for us to resist the temptations from Satan and a sinful world around us, since he also had to battle them. No one else can exercise that kind of sympathy in suffering. Christ bridges the gap between God and humanity, because He joined in human suffering. In response he knows how to deal gently with us. He is unsparingly patient with us. He is never condescending to those who fall into sin.

III. He is the Source of Eternal Salvation.

No other priest could bring about eternal salvation. The best that the Old Testament priests could do was the annual Day of Atonement ritual with its hope that the people’s sins of the past year would be wiped away. Sacrifices for sin had to be offered daily and yearly. But, Jesus did not inherit his office through a succession of priests. This is no temporary office; it is God’s eternal and perpetual arrangement. God has given his Son as a high priest to stand alongside us. More importantly, Jesus has no successor. Christ is superior to the High Priest. His office is eternal, and his work of mediation will not, need not, ever be repeated.

Christ’s perfect obedience also made Him the perfect mediator between God and man. In the agony of Gethsemane and Calvary we are shown the full extent of this obedience. As Paul says in Philippians, “he humbled himself and became obedient to the point of death—even death on a cross.” (2:8). There, as the great high priest, Jesus obediently gave himself as the perfect sacrifice for our sin. Jesus in Gethsemane, with crying and bitter tears and anguish, pleaded with His Father to be delivered from the jaws of Death. And on the third day, God answered his prayer and Jesus rose victorious over death.Something no Aaronic priest could ever do.

Jesus, by his life, death and resurrection became ‘fully qualified’ as our Saviour and High Priest. Because of his obedience, salvation has been earned. And this salvation is eternal, that is: perpetual, unending, lasting forever and ever. The work is complete. Nothing—no ceremonies and no sacrifices—need to be added to it. The bill reads “Paid in full.” BecauseChrist has overcome death and now lives and reigns forever and ever, we too are offered a salvation which is eternal. Through his whole life of perfect obedience, and his bitter suffering and death, he will undo the ravages of sin upon us. This eternal life is held out to all who cling to Christ, to all who obediently confess Him as their High Priest.

The do-it-yourself approach to God simply won’t work. In that system, you have no mediator, no one to represent yourself before God. If that’s the case, then you’re left with simply relying upon yourself for salvation. You alone have to bridge that insurmountable chasm between you and God. If you do-it-yourself, who will sympathize with your weaknesses? You would have no hope of a salvation which lasts forever and ever. The best you get is a man, like yourself, offering animals year after year, day after day. But Hebrews puts before us the alternative to going it alone. God has ordained and appointed Christ to be our great High Priest. Since Jesus is our great High Priest, we must place our confidence in him alone. God has given us a real high priest, who rendered the obedience and made the sacrifice for us. Jesus is a mediator who understands and cares about our problems, trials, and temptations; who not only can understand but will also deal gently and decisively with us by his redeeming work. Jesus is our source of eternal salvation. “Since, then, we have a great high priest who has passed through the heavens, Jesus, the Son of God, let us hold fast to our confession. Let us therefore approach the throne of grace with boldness, so that we may receive mercy and find grace to help in time of need.”

And may the peace of God, which passes all understanding, keep your hearts and minds through Jesus Christ our Lord. Amen.

← Sermon: Kept Safe by the Word
Sermon: Seasons of Temptation →